From a digital construct towards a workflow engine

It all began in 1997 with the business idea of developing tools for the daily collaboration in construction planning in order to make it safer, more effective and transparent. With our 20 years of experience in planning and purchasing, developing and operating cloud-based solutions, we are now embarking on the next challenge of developing automated, workflow-based process operations for the collaboration of all stakeholders involved. 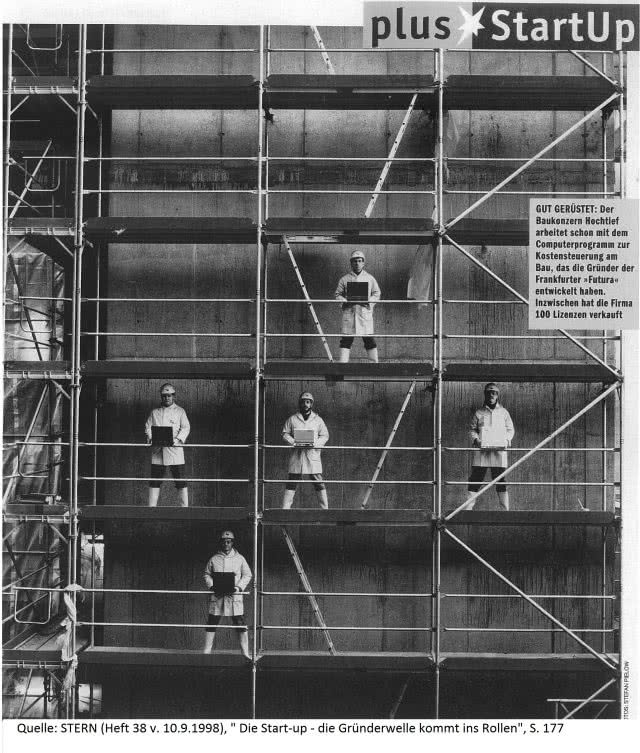 In the beginning, in 1997, we focused on the digital construct and the interconnection of alphanumerical and graphical data. In 1998, Futura Solutions with its software for the construction sector, which facilitated and specified the work in planning offices for large buildings, was among the five winners of the German federal start-up competition “StartUp”.Following that, we developed the so-called “triple accounting method” with FUTURA AVA in order to exchange data with CAD-systems. Thereby we accomplished a first integration and the result was impressive. With the 3D drawing, elements of the triple accounting method already took effect at that time, and with each component designed like that a so-called automated item list could be generated; a calculation in line with the drawing. Even back then, the digital construct already connected various stakeholders and bridged gaps between applications.

To this day we have remained true to our slogan “well integrated” which is the guiding principle of our idea of integrating stakeholders. As early as 2000 we launched the first cloud-based tendering and auctioning application myFUTURA. With Bayer AG and BASF, we had two high-caliber clients from the outset. In the next stage we interconnected planning and purchasing. We coupled the cloud-based myFUTURA application with the on-premise solution FUTURA AVA. Consequently, we have implemented our idea of integrating planners, purchasers as well as bidders and suppliers into the business processes of our clients via the FUTURA supplier portal quite early.

From an interface towards integration

In 2005 we took the next significant step: We connected the FUTURA application to the SAP-system via interfaces. BASF, RWE and Salzgitter Flachstahl were among our first clients. Today, we provide the third generation of SAP-interfaces which we now call integration: Beyond a mere technical system connection, entire process flows are realized by networking business elements of FUTURA and SAP. The SAP system can now be operated interactively or remotely via FUTURA. A great advantage for users: They only have to operate one system and will receive information about the processing status of documents in the other system via the so-called error handling.

With the current FUTURA version, we are pushing forward into a new dimension. All stakeholders involved in the planning and procurement process, be they purchasers, consumers or planners, auditors or bidders, suppliers and service providers, are now being interconnected within one single cloud-based application – seamlessly and across all departments in real-time. Sourcing, purchase-to-pay and AVA are thus integrally brought together in a single application. Isolated applications, shadow systems and gaps between systems belong to the past. The FUTURA workflow engine, which can be completely adjusted to client-specific workflows, is operating at the point where a seamless cooperation under specified circumstances is required of all stakeholders. The process is controlled by predefined rules and the stakeholders are automatically informed about necessary actions. The big advantage: Even the most complex processes with their different sequences are easy to handle, because the workflow is running according to the specified schedule.

The future is mobile

The next stages of development have already been outlined. “well integrated” will continue to set the agenda: To create tools with functions required by purchasing 4.0 and to considerably simplify the work of all parties involved. Currently, various apps for usage on mobile devices are being developed.

This could also be interesting

Out of the box process

4 phases for your quick start

Successful FUTURA usage in other companies